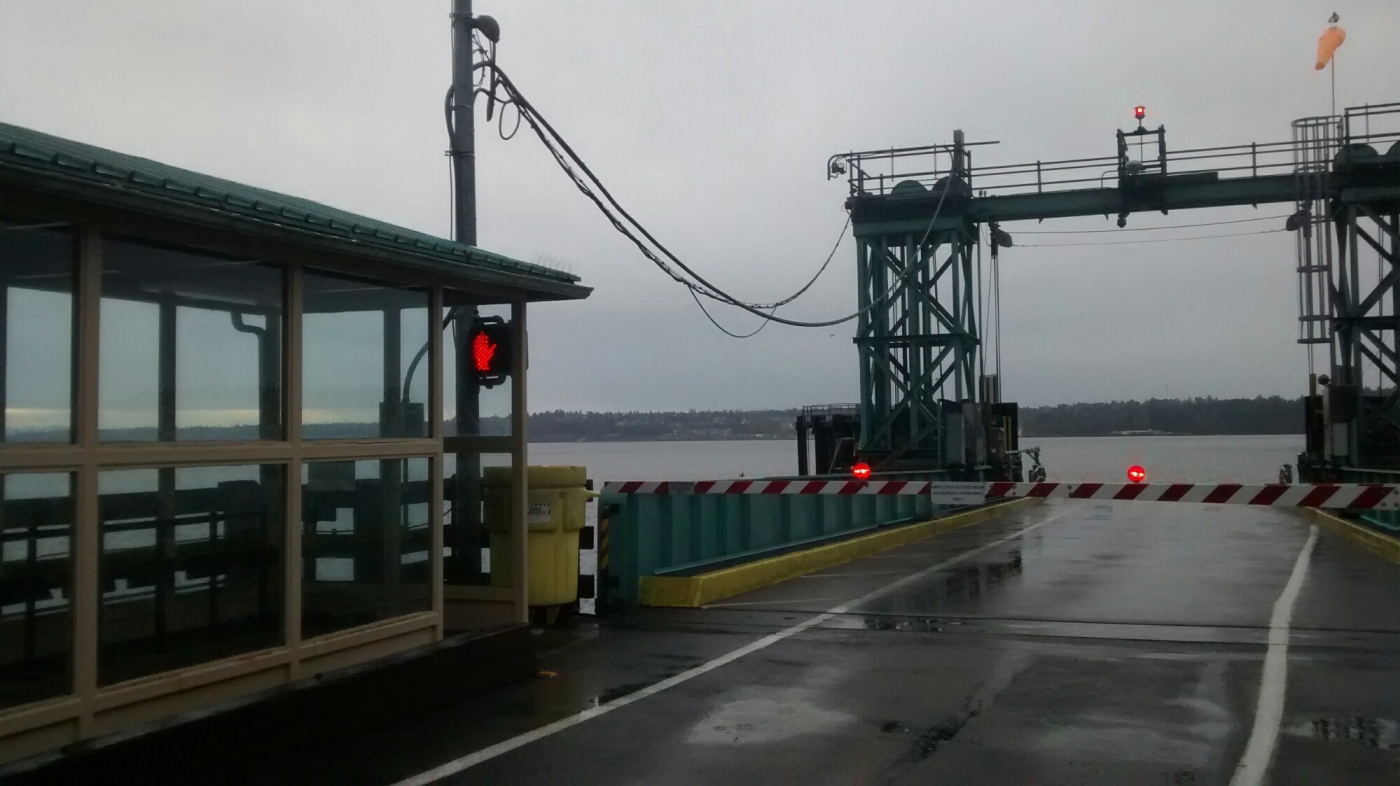 This is part 3 of this little adventure story.  Part 1 is here.

The next day, I woke up after a necessary and refreshing 10 hours of sleep. I never set an alarm because I could really only walk around 15 miles today given the available places to stay. I ate an entire bag of lime flavored crackers and the rest of the cheese I had brought and got ready to go.
I couldn’t find my host as I was leaving, but I texted her thank you and said goodbye to her chickens. I walked back to the main ‘highway’ and the couple of miles through remote forested areas to the southern coast of the island. The ferry dock came out of nowhere. The sun was just coming up, the seagulls were seemingly fighting about something, and there was no one there. I could see the ferry arriving at the other side, so I sat in the tiny bus shelter to wait. It was raining lightly.

While I was waiting, somone pushed a man in a wheelchair into the shelter with me. When the ferry employee told us to get on, I was paralyzed with indecision. Especially after I realized the man couldn’t really hear me, I didn’t know if I was supposed to help him get on the boat or where his friend had gone. Eventually he slowly looked up at me and said ‘you first,’ with a big smile so I went to my seat.

The crossing into Tacoma was very short, and I was let off in a little park. I walked along the coast in the park, but then I was hungry and coffee-headachey so I found a cafe. I ordered a giant cookie and coffee, as well as some sort of breakfast enchilada to go. The way the enchilada was packaged made it really hard to get into my dry bag. Struggling with this in a crowded cafe made me grateful for my previous hiking experiences for making me insensitive to this kind of embarrassment.

Some of my walk into Tacoma took me through adorable neighborhoods, and I saw some more interesting roadside art. A man called from across the street, “getting in your walk today? Gotta get in that daily walk! I love it!” I don’t know why he thought I was carrying a backpack.

I saw the infamous Tacoma Narrows (the one used to teach engineers about how resonant frequencies can lead to disaster) bridge and then came upon a trail as I approached the city. I didn’t have too much farther to go so I decided to see if I could walk along the shoreline for a while. I followed some teenagers into the park until they all became fascinated by a fuzzy caterpillar, then I followed one kid with a hammer to the beach. At first I thought maybe he worked in the park because of the hammer, but he just kept walking down the shore, balancing on logs, as I sat down to eat my lunch of breakfast enchilada and carrots on a log.

After I walked as far as I could on the beach, my boring walk through Tacoma to my Airbnb began. I bought a couple of Snickers bars because I was running out of food and called my parents for entertainment while I navigated the busy street. When I got to the house, the host talked to me for a bit about hosting international students and started to get ready to go somewhere. I took a shower because it had been raining all day.
The only place she could recommend for me to eat was a mile away, but I had nothing else to eat so I headed out after resting for a while. It turned out to be super worth it. It felt a bit sad walking through neighborhoods by myself in the dark, but I had the fluffiest omelette ever at a diner with tons of Christmas decorations and a very friendly waitress. Still no one asked what I was doing. After setting up a time and place for my friend Rachel to pick me up the next day, I went back to my room and went to sleep.