I’m writing about 100 mountains in the northwest, big and small. The list so far is here.

Tiger Mountain, I will admit, is more of a hill. Its name is confusing because, in addition to being literally tigerless, it really doesn’t merit such a fierce name at all with its hospitable, forested slopes that reach a maximum elevation of about 3000 feet. It seemingly was given the name because Cougar Mountain had already been named, and they wanted to keep with the theme (though there really are cougars there, so the reasoning is a bit lost on me). Also lost on me is the name given to the region, Issaquah Alps, which the Issaquah Alps Trail Club recounts as “the outrageous name for the foothills surrounding Issaquah… which none of us could say with a straight face at that time.” Amazingly, this strange name has stuck and is widely used.

Tiger may not be a “real” mountain, but it is a real forest, and it is a stunner. It’s that damp, mossy, fern-filled forest that really defines Washington, where light plays on the fern leaves between dewy evergreen branches. Occasionally, the trail breaks out into a comparatively clear area where you can appreciate the impressive size and uniform straightness of the trees. And the unnaturally emerald-colored moss bordering its trails are available to anyone willing to drive less than an hour from anywhere in Seattle. It’s been there for me and many others like nothing else when in search of a night hike, a stroll while injured, or a place to take a visiting friend who isn’t into rough terrain. Its proximity to eager trail maintainers is evident from the WTA description of the trail, which includes very loving descriptions of countless whimsical, named landmarks. The Issaquah Alps were named by Harvey Manning, who along with a man named Bill Longwell, seemed to be the main proponents of a trail on Tiger mountain in the 70s. The trail club was incredibly devoted to have made such a beautiful, graded, and extensive trail network in such a convenient place. 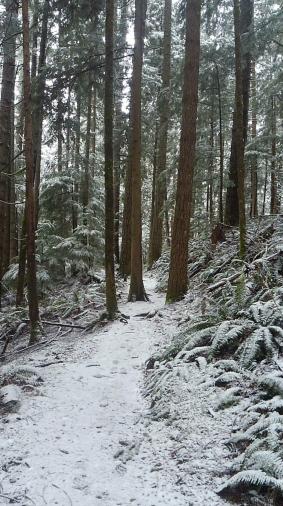 It wasn’t easy, though. The Tiger Mountain Trail was perhaps the “most political trail” of its time due to conflicts with a logging company. Originally, Weyerhaeuser, a large company that includes logging operations, was not supportive of efforts to make a trail as they were concerned it would be bad for public opinion of the company. Eventually, by some strange coincidence, Manning’s former scoutmaster was a bigshot in the company, and he came to believe that a trail could in fact educate the public to form a positive opinion of the planting and cutting cycle of the logging business. In the end, this was not true, and eventually the company gave up the land, which is now controlled by the DNR. On my many visits there, I have seen stumps, discarded tree bits, and young clusters of trees all scattered among the old forest. The logging process is still very visible. There is something fitting about Seattle residents recreating among the remnants of a Weyerhaeuser operation, as it can be argued that the modern logging methods brought by his company created the financial foundation for our city’s growth in the 1800s and early 1900s.

With the growth, of course, logging brought a large ecological dilemma and many workplace deaths. Logging is a very dangerous industry, and on my last visit to Tiger Mountain, I saw for the first time an interesting piece of history, the “Artifact Trail” that takes you to the site of a 1925 train wreck. A train carrying lumber and other supplies experienced a brake failure, and while some escaped, the engineer was pinned under the train and was killed. Much of the wreckage is still there, and very visible. An astute visitor (which I was not) can apparently find a bathtub and other remnants of a logging camp that had burned down two years before in the same area. 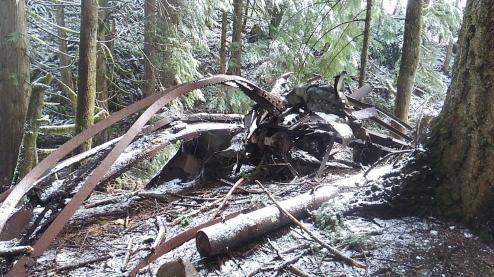 Industry is still alive on Tiger. Now, there are transmitting antenna for many Seattle radio stations, including KISW, which coincidentally was at some point managed by the same Harvey Manning. And the trails are some of the most popular in Washington. For such a small area, it seems amazing how much of a culture has developed around it: there’s the inexplicable and kind of smelly “Hiker’s Hut,” the well-known and abysmally bleak “training” hike many take up the Cable Line Trail, the decorated Christmas trees year-round, and the popular activity of paragliding off Poo Poo Point. Everyone in Seattle has heard of Poo Poo point and laughed at the name, but I only learned while researching the area’s history for this essay that it is named for the sound of train whistles. I may never hear train whistles exactly the same again.

Generally, I like to pretend I am far away from human influence while hiking, but the Tiger Mountain trails are like a better version of a city park, with a wonderful, human-feeling history with something like a mythology to its confusing forgotten-inside-joke names and abandoned man-made objects. A lot of love and community went into building these trails– an attitude, I’m sure, that has informed initiatives to protect other forests as well. And for my part, I can get distracted by dramatic alpine landscapes and forget how much I love being in the woods. That is, until I spend a minute looking closely at the trails here.