When we got to the top of Mt. Stuart last year, we were basking in the excitement that we could climb something so prominent in one day and with no technical skills. Climbing something so obviously massive, the 6th highest peak in Washington, as inexperienced climbers, seemed to make all of us feel like we should climb more mountains. And even though we took the long, “miserable” Cascadian couloir (when the road was closed, for extra tedium), we also saw a party at the top making coffee after climbing the North Ridge. It was a climbing ranger and his friend, and we thought they were literally the coolest. Wouldn’t it be weird, to climb to the top of something big via a technical rock route? How surreal that would be!

Even getting there by “the easy route” seemed improbable. Rachel’s coworkers didn’t believe we had done it in a day. And this wasn’t our first attempt; the first time we tried, we did make very dumb mistakes– trying when there was still a ton of snow and taking a wrong turn on the trail at the start of the approach, following the trail toward the West Ridge, a more technical but still popular route, instead. But later that year, we came back without getting lost.

This year, armed with climbing gear and actually having downloaded Gaia and marked the route for the approach, I set out with Westy to climb the west ridge this time. Still, I watched as he checked the map at the trail intersection and didn’t double check myself. In some kind of fitting symmetry, we took the trail to Long’s Pass instead of the typical west ridge approach. How I hadn’t learned this (not especially elaborate) trail system from last time I don’t know, but a pretty easy ridge walk got us back over to Ingall’s pass. Plus, the view from Long’s Pass was sentimental, so I was happy to see it again. From here, you can see the huge mass of granite that is Stuart, which looks to a person fresh from the east coast like such an unreasonable thing to climb. Here, Wade and Rachel and I turned around on that first trip, having a family sitcom moment in which we all said we loved each other even when we made dumb plans. Here, the three of us watched the sun rise on our successful trip. And here, I laughed at my inability to learn from my mistakes and we started to head west instead of down. 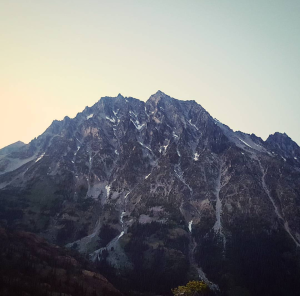 After some pretty easy scrambling that was definitely better than backtracking, we rejoined the proper route just before Ingalls Lake. The lake was shimmering in the sun, and since we had started very late, it was in full summer swing with people jumping in, laughing, and picnicking. We tried to get enough water for two days and drank a lot while we could.

Both of us complained about carrying all the gear as we started up past the lake. The route continued up as a nice trail for a while, but we were already out of the shade, so I was grateful for the fall weather. Westy had printed out a trip report with photos (here), and once we got to the “scramble” portion we were frequently consulting it. This part was varied and included some sand but also a lot of scrambling on really nice, solid rock. Apparently a lot of people find themselves very lost or end up adding a lot of difficulty, but the trip report we had proved mostly very useful. By contrast, a year ago on the Cascadian we were so bad at routefinding that I’m not sure we ever found the correct route, but even the best way is mostly just sand and talus fields. I disagree with the classification of that type of thing as unworthy and terrible, but this scramble was definitely better. On the ridge there are be vast expanses of foldy rock shapes and cool cracks, and you can just pick your favorite way up. Most of it was interesting and unscary, just a wonderful time. I tried finding the best route, and I think I made strange decisions sometimes, but it was all fun!

The ridge is populated by many improbable stacks of rock in towers, like one named Long John’s tower. The entire landscape felt like an alien castle built somewhere with less gravity. Right near the west tower, we knew we only had a tiny bit left before the summit block, and the sun was setting soon. We were in no hurry so decided to bivy and watch the sun set rather than climb inefficiently in the dark, partly because the bivy site we found was so awesome. (We found bivy sites along almost all of the route, though.)

The sunset was spectacular, and we made peppermint tea and laid out the rope to sleep on (because we somehow both forgot sleeping pads). I don’t get to take many overnight trips because I don’t work normal weeks, so the sunset was very special! Something about doing Stuart in a day the first time felt like a nice accomplishment for the three of us, but on this trip I was happy to wake up late and also spend more time with Stuart (and I wanted to do nearby Sherpa this time, too).

We took our time waking up the second day as well, and then we went around the west tower and got to the “technical climbing” part. This was weirdly the one of the only parts of the trip report linked above that wasn’t extremely clear. It was described as “inverted parentheses” and looked like this.

The climbing felt easy, which means we probably found the correct 5.6 route! It was relatively easy to follow and continuous with just one little down scramble that I didn’t think was worth protecting. The summit was beautiful! We had it to ourselves though we heard some parties behind us. 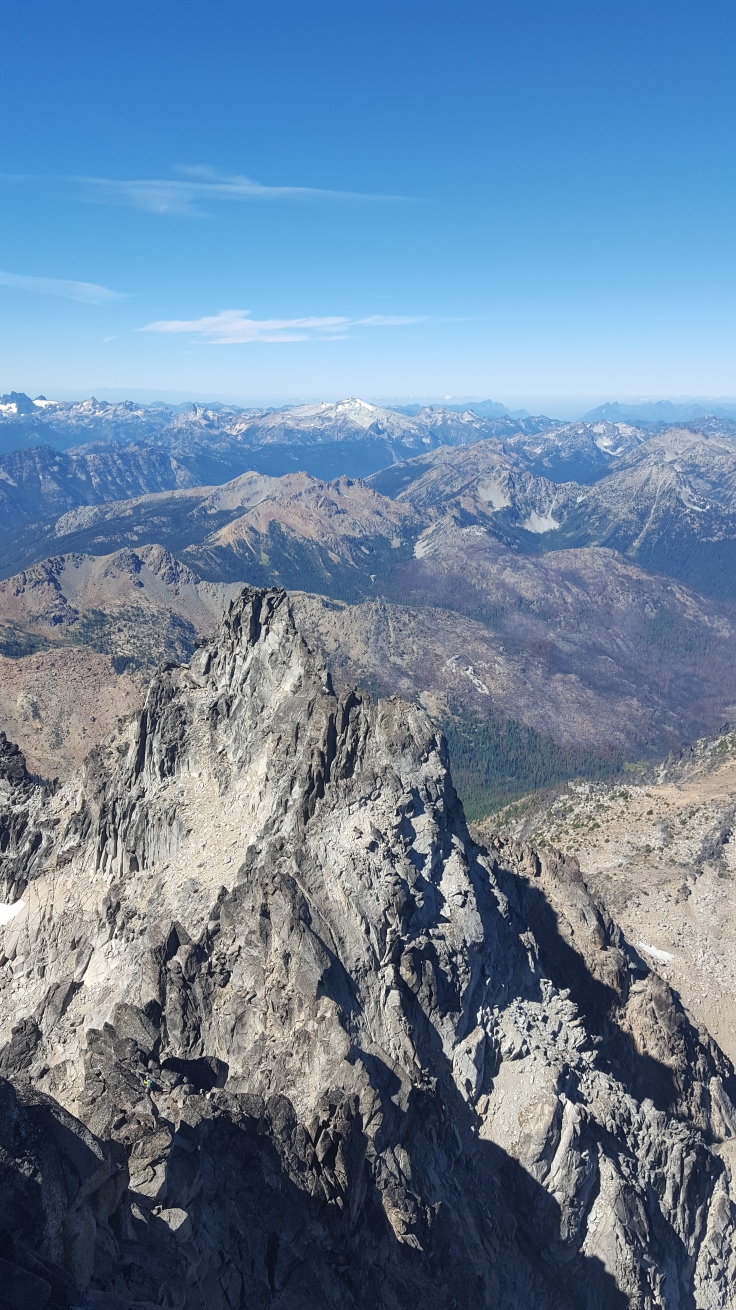 After that, we decided to continue on the ridge to Sherpa, which proved to be more of a routefinding adventure and worthy of another essay. Then, for the descent we took the couloir between the two peaks, thinking the Cascadian would be slower because we would have to backtrack. This time, we were wrong. After melting a bunch of snow to alleviate our pretty significant thirst and following a fun talus field for a long time, we lost anything resembling footprints and ended up bushwhacking.

It was definitely not faster, as we started off occasionally going through trees between the rocks and ended up eventually in dense thickets of alder. (It seems that you can go this way if you stay right/west but we did not find the trail.) Westy kept rationalizing how it could be worse, which made me feel better at first. Still, despite my love of bushwhacking, at some point every tree that was in the way felt like a personal attack. Sometime around midnight my foot went through a rotting tree that threatened to pull my shoe off, and I was momentarily more frustrated than excited to be there.

Soon, we went through some open pleasant forest and I heard Westy say “here’s the trail!” He had been choosing the route through the brush as I struggled with being able to think quickly anymore, so I thanked him and gave him a hug (even though arguably coming down this way was also his idea, I’d also thought it seemed like a good one!) We were back on the trail along the creek and passed the turnoff for the Cascadian on our way back to Long’s Pass.

Last year when I came down Stuart, I remember joyfully jogging back up Long’s Pass and waiting for my friends. This time, however, the trees had beat me up a little. I went in front for a change, and I guess I was still making nearly normal progress, but I had no brain space left except to remember to actually get up the 1000 foot hill. After the top, though, we were chatty again all the way to the car. We finished in the middle of the night, but I felt great. Definitely dehydrated, and much more tired than the first time, but just as accomplished and in love with the landscape!