Here are my journal entries for the first several days of my walk to San Francisco, which you can read more about here.

I walked in the quiet snowy city from my partner’s house in capitol hill to the southern tip of Vashon island. It was sunny for the first part of the day, and the ferries were on schedule. I enjoyed some stops at local cafes on the island and picked up some soup for my host. Many things were closed, snow buried all of the public parks, and I didn’t see many people. Then it started snowing pretty hard, which was quite pretty. Multiple people asked if I needed a ride. The surf was kinda crazy compared to what I’m used to on Vashon, loud and wild in the heavy snowfall. I walked 26 miles and got to Mary’s by 4:30 PM. 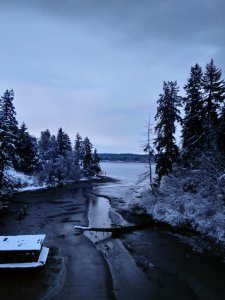 Mary was the very first person I stayed with on one of my long walks, because I booked her room on Airbnb. Two and a half years ago, she made me dinner, and this time she let me stay for free. She works with an organization that helps parents, especially in at-risk families, learn about childhood development and teach their children at home. She has a lot of chickens and a tenant who previously lived outside on the island for years. He said he liked hanging out at bars during that time and he made a lot of friends but that it was stressful not legally being allowed to be anywhere.  I tried to talk to him about his experiences and he told me which trees to shelter in and talked about bigfoot.  I kept feeding the pellet stove.

When I visited, Vashon was largely without power. They didn’t have electricity when I arrived but had fired up the generator and the pellet stove as a replacement for heat. Mary ran around finding sleeping bagss for me and the other guests and we all shared a cozy evening despite having to use headlamps to use the bathroom.

I left the house before anyone woke up and boarded the ferry at sunrise, as I had a 34 mile day planned and wanted to give myself time in the snow. The walking was indeed slower in the slush.

I got to a coffeeshop in Steilacoom around 11:30 and was alarmed both that I had only gone 16 miles in the slow conditions and that the road conditions were so bad I didn’t feel comfortable walking next to cars once it got dark (which together meant getting to Olympia didn’t feel safe). After listening to silence and audiobooks and squinting into the snow for hours, I had a hard time adjusting to the very cheerful barista at the coffeeshop, who was working alone and seemed to be friends with all of the military vets at the shop, who were playing board games. “Traditional macchiatos aren’t actually any good,” she was telling the new recruit. “But this one is iced and sweet.” I was too embarrassed to order a macchiato after that.

Next, I walked through military areas on a road bordered on both sides by “unexploded ordnance” signs. Multiple people in uniform offered me rides, which made me feel less lonely even if I didn’t take them. The snow came down in huge chunks. After the forested military base, I dodged cars a bit more in DuPont, becoming increasingly worried about road conditions. I saw kids sledding, and a bunch of people shoveling driveways.

By the time I was approaching Lacey, the ways I could proceed did not feel safe. The area is surrounded by a combination of major roads, wildlife refuge, and military land. A man with a friendly face and a clean truck offered me a ride out of the scary road, and I accepted. He took me to a gas station where he told me the attendant was very nice and would let me stay for a while while I called a ride.

While I waited, she talked to all of the workers who were coming in and out while fixing the power lines nearby, who had been working consecutively for many hours. My Uber took over an hour. I went outside with the attendant on her smoke break. Eventually the driver arrived, and he told me about the injuries that kept him from working other jobs and someone who attacked him while he was driving.

I spelled my blog name out to him a few times when he asked, and I was unimaginably grateful to be dropped off a mile from my friend’s house. I’d thought I would get an Uber back in the morning to “not cheat,” but I decided that section of the route was just not safe until the snow entirely melts, so I accepter that I couldn’t walk that 7 mile section. I gave myself a longer, slower, safer route for the next two days as well to allow the snow to melt and to not be so pressed for time in these conditions. My friend Michelle made me dinner and we talked about our favorite documentaries and her different jobs working for politicians, which was what brought her to Olympia for part of the year.

Day 3
I woke up and Michelle made me a bagel. She is Midwestern, so she says “bag-ull.” While she tried to figure out if she was expected to go to work in the snow (her car was stuck), I delayed and left very late for me, at nearly 9. She encouraged me to stay longer and I really didn’t want to leave either and brave the slush.

It was truly bad. The roads were foot deep ice water and cars kept splashing on me. I was eager to get out of Olympia and back onto some kind of rural road. I got to a Safeway after some very strenuous snow situations and bought some bananas, then the situation improved. For the rest of the day I was able to walk on roads, hit a groove, and talked to no one except the gas station attendant who really wanted to protect me from the rain with plastic bags. Eventually the rain stopped for thirty minutes and I have never been so happy. The birds seemed happy too.

I walked 21 miles by 3:30, very much avoiding risk of walking at night this time. Wade insisted on coming down and getting me a hotel room right on my route. We went to Burgerville and watched a movie.

I had to do a short (12 mile) day because it was the only way I’d be able to find a place to sleep indoors and I wasn’t feeling camping in that weather. I found variety by playing in the pool with Wade, returning to a coffeeshop I’d stopped at on the way to other trips, and doing yoga in my room in the evening. Wade worked from the coffeeshop for a while so I’d see him when I got there, and saying goodbye was hard.

In Chehalis, a historic-looking and crumbly town, I stayed at a taproom for a long time talking to the bartender about beer and her trips to breweries. All the people around shared photos of their children and stories of their fear of flying. I was happy to listen to the conversation and have a break from talking about my project. I drank two beers, but I don’t drink much so I almost immediately went to sleep after laundry.

I compensated by waking up at 5:30 the next day and hiking 32 miles in two guantlets of many miles of rain and nowhere to sit down. In the morning, I passed through Whitlock, which was tiny but had chicken statues, huge industrial buildings, small farmers selling eggs, and of course, the world’s largest egg. I could not see the volcanoes in the bad weather, but I knew I was among them. 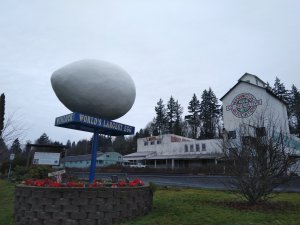 Luckily in the middle of nothing to do, I found the Little Crane Cafe in Vader. It was decorated with balloons and streamers for Valentine’s day, and a young man in a pink shirt gave me a big smile and asked what I was doing. When I told him, he asked me if I was “a bleeding heart liberal,” and then laughed and offered me a free lunch when I was taken aback.

As my fingers and lips thawed the servers all joked around with the veterans and other regular patrons in this town of 600. My server inherited the business from his family after living in Portland for a while and “wouldn’t want to live anywhere else.” He told me he used to not like Vader but that a lot had changed and he was happy to move back. He ate his lunch next to me. The servers, who were all clearly having a great time, excitedly put stickers on their shirts to take photos for me. He gave me a cookie his aunt made for him for Valentine’s when I left.

Then more rain, the welcome sight of Castle Rock, and Westy meeting me for breakfast for dinner and sleeping in the car. At first, he didn’t understand I was tired and didn’t care if we found a lot of activities. We had a relaxing dinner at a diner filled with tons of strange decorations.

I woke up in the car and we got ot coffee at the strange sawmill-themed small town coffeeshop. Westy went to work and I sped through a series of small towns with some closed cafes, evidence of old logging industry, and very few opportunities for rest.

Eventually I found a café at an RV park that was closing, but they let me use an outdoor outlet to charge my phone.  Although it was getting late I realized that if I camped soon, I’d have to walk 40 miles the next day to get to Portland.  So I carried on for several hours instead in the dark and rain, calling my parents and talking to them about their dog, Bailey, and homelessness in Atlanta.  The lights of the city in the distance were beautiful.  It was pouring, so I gave in to the temptation of a hot bath at a motel.

I walked 32 miles that day, and woke up with a bit of dread about walking 29 miles the next. It was still raining and still far between safe and comfortable places to sit. But the rural roads were surprisingly lovely and I met a nice barista and bought bread for my friend. When I got to the suburbs of Vancouver, I passed hours of businesses with angry “NO PUBLIC RESTROOM” signs and judgmental pedestrians, which was very unwelcoming. I talked to my friend during a rare break in the rain about her stress about buying a house.

Then, I found myself at the bridge! I took selfies with the “Entering Oregon” signs and felt a new surge of excitement despite being tired. The river was full of large boats and the wind was refreshing.

After a dizzy tired walk through Portland, I got to my friend Noelle’s house and met her roommate Shannon. They made grilled cheese and chickpea soup, and Noelle’s sister in law brought homemade cookies. The homeyness of their house was overwhelming and we talked into the night about politics and where we were from and progressive cartoons.

Time for a rest day. My feet hurt.