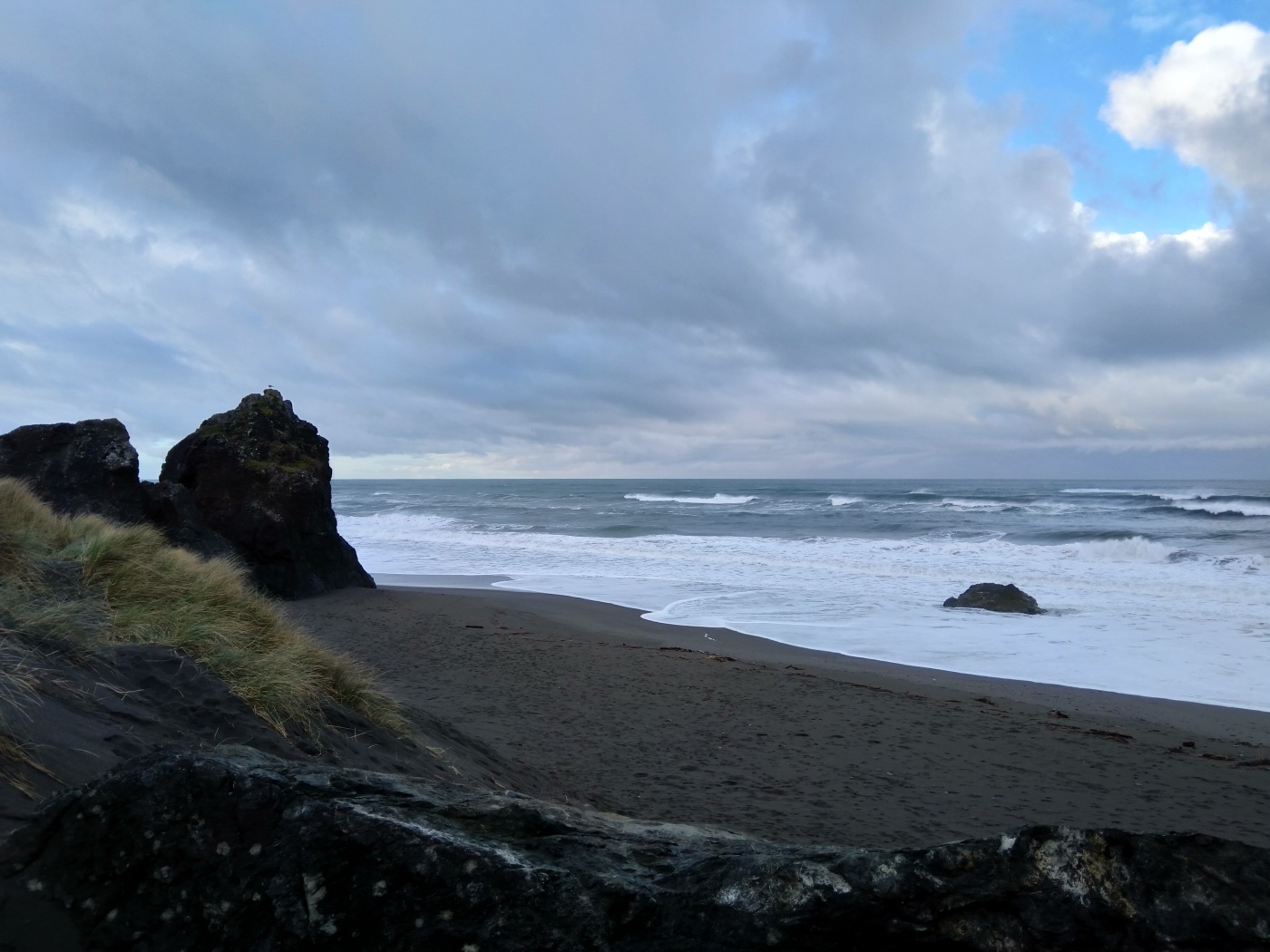 I’m walking from Seattle to San Francisco. Check out the landing page for this trip here. Donate to facing homelessness here!

I left Florence early and walked through a bunch of the Oregon Dunes. The dunes themselves were pretty but often it was just woods and ATV rental shops, closed for the season. The first part of the day it rained, then it cleared up and I had good foggy views of the hills! There was some snow on the ground. 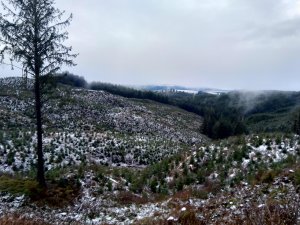 Wade brought me curry before going home, and then I walked several more forested hours before stopping to use the bathroom in a convenience store. The girl behind the counter wore big heart hoop earrings and was incredibly cheerful. I asked her if business was slow this time of year and she said “sure, but we get all types of people. Today a guy was in here trying to preach abstinence to me for an hour.” She offered me the rest of her free samples of a pastry as she continued, “I just kept telling him he should make up rules for himself and not other consenting adults. I lectured him too because I just get bored. Gave him a taste of his own medicine.”

That night was supposed to be 28 degrees and wet, so I begrudgingly checked into a cheap motel in an RV park after walking 32 miles.

The next day, I walked through more of the same until I was excited to realize I was approaching Coos Bay! I crossed the very impressive bridge in fantastic weather and looked out at the bay. I went to a diner called Mom’s Kitchen where everyone knew each other and they all doted on me. I asked about the award for “best hummingbird knees” on the wall and “mom” explained that a regular customer had come in asking for them jokingly for months, until she broke up some toothpicks in a bowl and gave them to him. And then he made her an award. 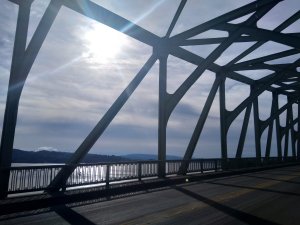 I also met a cyclist doing the route from Portland to San Francisco, very uncommon in winter, and she put a Just Say Hello sticker on her bike. I found a super discounted Airbnb owned by some friendly people in the next town and booked it. Leaving the cafe to make up time, I wish I’d asked the girl more about her trip. I wonder what brought her to bike the coast in winter, from England.

My hosts were incredible. It was worth walking the 39 miles to their house for the extremely homey and detail oriented hospitality. There were chocolates on the pillows and handwritten welcome notes on the door. All of the antique furniture was lovingly chosen. Their daughter had written a book about the PCT, which I paged through, homesick for the mountains of Washington.

My host told me when she was growing up, her mother had a mental illness and that she spent most of her childhood without a home, in cars or tents and afraid all the time. “I think that’s why I’m such a home body and home maker now, I just want to have dishes and normal things!” And it was easy to see she was good at this. Every detail of the house was loving and coordinated, from the handwritten history of the area to the labels on the shampoo. 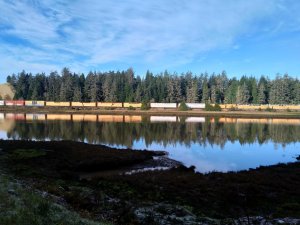 I was a bit sleepy after the long day the day before, and I wasn’t moving fast. It was sunny, and after coffee in the adorable Bandon old town area, I talked to Rex for a bit and was on my own until I encountered my only other civilization for a long time, a woodworking shop where I stopped for water and somehow ended up sitting and watching the news for 45 minutes with the woman there. 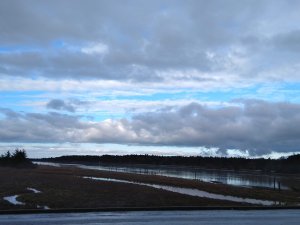 The most eventful part of the day was when around 4 I got a phone call from an old friend. Soon after, I reached a general store that only took cash and had the strange rural Oregon blend of country accents and kombucha samples. 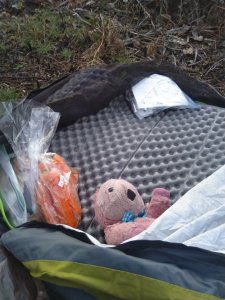 The weather was really great, so I figured I’d hide about 5 miles north of Port Orford, after 26 miles, and try to catch up on sleep. I ate a bunch to stay warm and passed out around 8:30. The sky was full of stars and a crescent moon when I woke up briefly at some point.

I woke up around 4:30 to frost falling in my eyes. Everything was covered in SO MUCH frost, the entire outside of my bivy sack, my hair, a hand that had been out of my sleeping bag, my stuffed otter’s head. I decided to just get up and put on my frozen shoes and walk to get coffee. It was a long, dark walk, but I eventually thawed out in a shop.

All day, the weather oscillated between heavy rain and sunshine. The waves crashed dramatically along the scenic route for the day and I was ecstatic. I saw some big holes in the shoulder of the road, and then the friendly construction workers fixing them, who I talked to multiple times as they drove by. 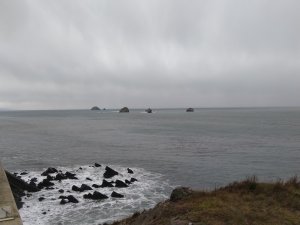 I got a little tired from not really being able to rest during the day (not a single business or shelter!) but the wind was exciting and the ocean beautiful. After eating fish tacos in town, I was totally soaked and felt the familiar tingling burn of frostnip, so I checked into another motel after 32 miles. 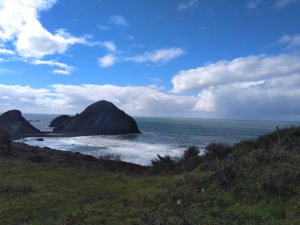 I took a while to get out of bed as I was dreading another day in the rain with no shelter. I was getting burned out on waking up, hiking 12 hours, and going to sleep, I thought. I resolved to take a half day tomorrow and find something else to do in the morning in Brookings.

But it was actually nice at first! I got coffee and left Gold Beach to encounter more beautiful exposed cliffy highway and actually ok weather. After a few hours, it started to rain, but I was feeling good about dealing with 20 or so miles of it. Soon, though, I encountered a road crew. The road was closed. There had been a landslide.

“Are you sure I can’t go by on foot? Maybe when the crew is taking a break?” 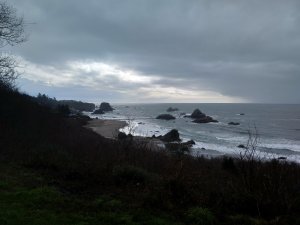 “The land is literally. Still. Sliding.” The lady clarified. She pointed at the detour, which she said she would never walk on, and I watched as two logging trucks precariously tried to pass each other on the one lane road. I… Wouldn’t either. After calling Westy, who is good with maps, and finding no other routes that didn’t involve bushwhacking near the still active landslide, I waited for a female driver and stuck out my thumb.

The first one stopped, and Ladonna took me around the landslide, 15 miles that were very scenic and that I was sad to miss. Her husband was a fisherman, and she ranted about the complexity of fishing licenses. When I told her about my walk, she said “can you beLIEVE you need an address to get food stamps?” I thanked her at the edge of town, walked a couple of miles to a bar and sat down with some tea and fries.

Everyone at the bar was interested in my story, and I found an Airbnb while asking the guy next to me, who was a wildland firefighter, about his work. We talked about frostbite and rockfall. We talking about how to minimize the risk involved in hitchhiking (really a thing I try to avoid unless I can pick my driver or it’s an emergency), and it took me a minute to realize that, refreshingly, he said he wouldn’t hitchhike personally but never suggested that my gender was a major factor. He just called me “crazy” or “wild,” which is essentially also what I thought of someone who thought fires were “really not that scary.”

I went to my host’s house and then ate multiple desserts and went to a wonderfully welcome restorative yoga class. I’d intended to take a half day to rest the next day anyway, so I was just rolling with the skipped miles and taking the afternoon off instead.

The class was great, a mixed bag of people of all ages and fitness levels engaging in a very calm, yin class. I’d never been to a class like this before, but the slow stretching was probably exactly what I needed at the moment. The yoga instructor laughed when I asked her about payment and took a photo for me after we talked for a while. 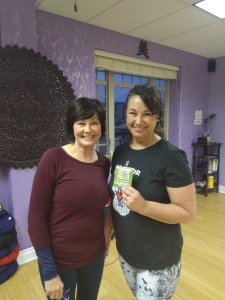 The next day I walked into California and walked most of the day in the sun! It was a wonderful change! I wanted to be wearing shorts. I mostly just saw coast and no people, until a man biking to do errands passed me multiple times. He had a big grey beard, little round glasses, and a stereo on his bike. “You walked here from Seattle??” He asked. “I reckon I’m scared of you.”

That night I stopped at a bar to get some food before camping. When I walked in, everyone in the loud and crowded bar looked at me. I awkwardly ordered a beer and sandwich and sat at a small table. Without any prompting and without knowing about my trip at all, a man sat down across from me and started complaining about the homelessness problem in the city. He kept saying there was a “homeless infestation,” as if they were raccoons.

“Why do you think they’re homeless? Why are there so many here?” I asked him.

“I don’t know. Do you think they choose it?”

“Well they cant just… Live wherever they want, or in the woods!”

I cocked my head at him. “Well, you’re different!” He said. 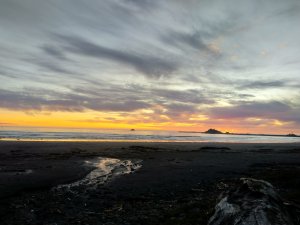 He was otherwise very friendly and a person he knew bought me another drink, I walked a few more miles up a hill out of a beautiful sunset, and slept among the redwoods after 30 miles.

Very poorly. I didn’t have frostnip, I had poison ivy, which I am very allergic to, so I was up much of the night willing myself not to shred my hands. I walked 15 miles in beautiful weather and beautiful trees and quiet solitude with lovely rustling sounds, and with increasingly unbearable itchiness as the afternoon began.

I just wanted cold water. Two restaurants were closed. I found a gift shop, which had no running water in the bathrooms and a depressing vibe. I bought a postcard and a coffee from a woman who said three solemn words and had me sign my receipt for $1.25.

Eventually I burst into a bar full of locals smoking and chatting, crying. I dropped everything taking money out of my wallet with my swollen hands, but I ordered something to eat and the patrons helped me look up a clinic as I had no service. I checked into a motel. Despite being in the middle of nowhere, I was lucky to be a $2 bus ride away from an in-network clinic. I’d rather finish my walk one day slower and not ready to tear my hair out with pain and itching.