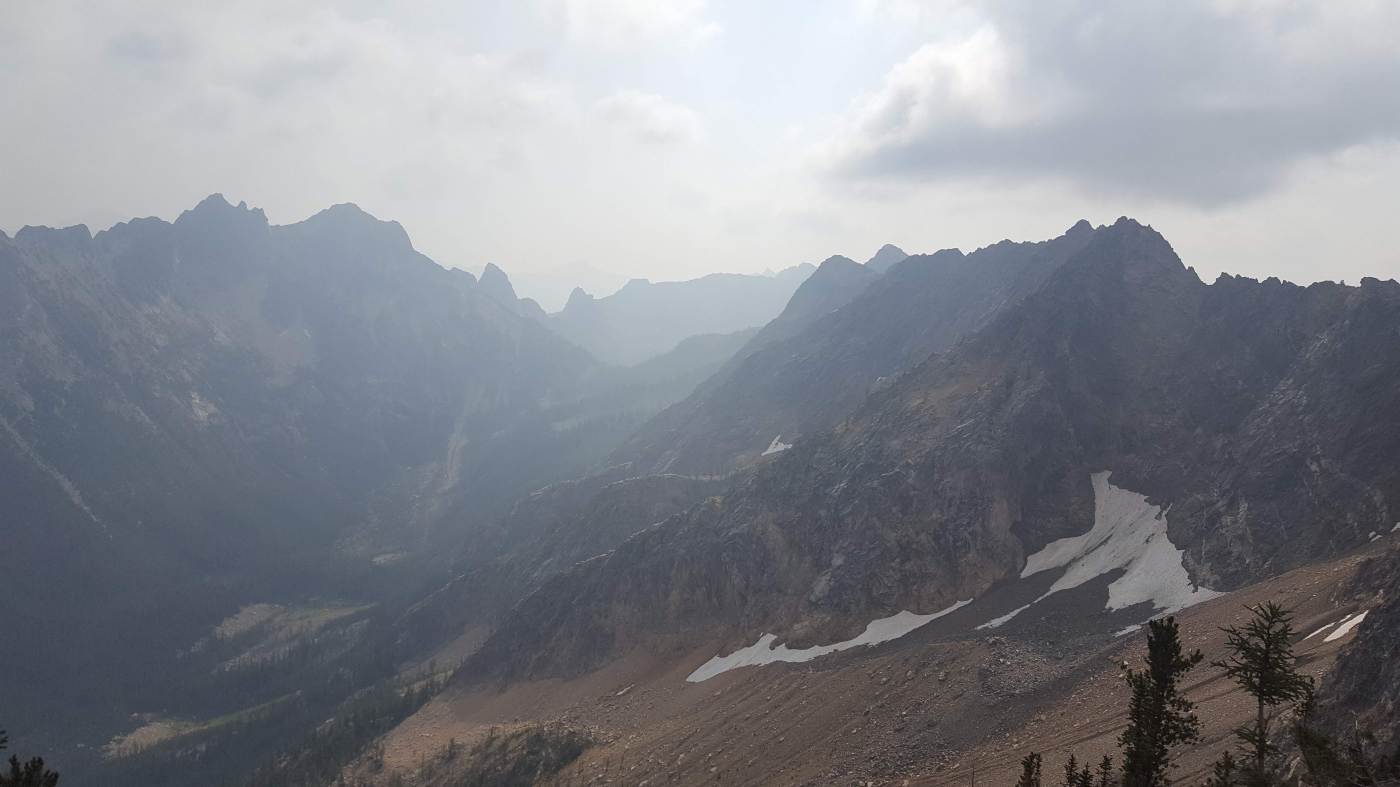 I’ve been making stickers with self-deprecating awards for climbers, especially new trad leaders, such as “didn’t freak the heck out on a 5.7,” “only got a little off route,” and “made it home.” This reflects the nature of the learning process. For most people, starting to lead (especially trad, especially in a remote, “alpine” setting) is a great way to feel bad at 300 things at the same time while also being terrified. For probably years!

For the uninitiated, lead climbing is what it sounds like, going first on a rock climb. When it’s at an established “crag,” sometimes there are bolts to clip the rope to as you go. You can fall a significant distance, though it’s usually fine, and this is sometimes a mental hurdle for people to overcome as they learn– trusting the rope and the bolts. That’s called “sport climbing.” Trad climbing stands for traditional, because it’s what you do when those whippersnappers haven’t come to your far-off rocky pinnacle and bolted it. You bring camming devices and nuts (etc) to place in cracks in the rock to clip your rope to as you go, and to anchor yourself between rope lengths (your follower retrieves them). There is trad climbing near the road because there’s trad climbing anywhere there’s a solid crack, but the main draw for me and many others is that you can climb mountains this way.

You’re relying on these easily-removable mechanical devices, which you, a non-professional, placed yourself with no oversight. That combined with doing so in a place where there is no bolted line to follow– and no one to hear you scream– can be a bit much. New problems include getting lost, not being able to hear your partner, running out of gear, running out of rope, getting your rope stuck in a tree, not finding a good anchor location, etc. It’s a lot to think about at the same time as climbing something presumably technical enough you don’t feel comfortable doing it without a rope.

Anyway, boring explanations aside, it’s both terrifying and hilarious to do something this weird and uncomfortable. Getting your rope caught in everything and being lost a lot is frustrating, sure, but also adventurous and funny. Usually people work up to it by climbing some short, straightforward routes with a mentor, but I decided that after a bunch of following and on-the-ground practice I’d do a very easy, but longer, “alpine” route with Wade instead, as my very first trad lead. 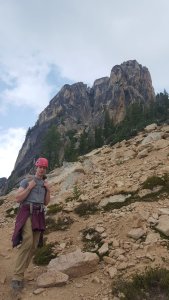 This actually worked out ok, because the easiest route up Early Winter Spire contains maybe 2 mildly tricky moves and some hard scrambling, so in reality it felt like something I’d really not mind soloing (not without some anxiety, but still).

That was great, because I had absolutely zero emotional faith that my borrowed cams would hold me if I fell. Despite intellectually feeling prepared for this totally appropriate beginner climb, I was nervous the whole drive there and felt kind of alone. Wade, while supportive and calm, had no experience with trad climbing and could not necessarily have helped me or bailed me out if I messed up. I thought about this as we got out of the car, wondering if having one of my mentors would have made me feel better. What if I couldn’t even find the start of the route? What if I just cried alone somewhere on a ledge where no one could find me?

The route was actually laughably easy to find. Hardly alpine, the approach was an established trail, where we saw a trail crew, to an obviously more vertical spot that looked exactly like the picture. Awesome. (That is probably the only time that has happened to me since.) The hardest move was a mantle right at the start, where Wade honestly could have just caught me in his arms had I fallen. As I climbed the three pitches, my nervousness abated.

The end of the climb is a scramble with a famous exposed catwalk bit, which was lots of fun. We put the rope down, scrambled, and met some teenagers from Colorado coming from another route.

“Do you climb in Index?” one of them asked me.

“Yeah, I’ve been following people there, there’s a lot of good stuff.”

Not knowing what that meant, I felt even more like the awkward adult that doesn’t climb nearly as hard as some random teens (a common feeling, I’m sure), but they were funny and gave me some abandoned cord they found on the route. Wade and I had a nice and timely descent, and I kept the cord and stored my gear on it once I got my own.

Over the course of a year, as the anodization on my shiny new cams slowly got chipped away, I did climb a little harder, and didn’t always freak out. For a little while, every time I was supposed to lead even one easy thing, I would dread it for hours. But I found myself drawn to learning because while I was so bad at it, I don’t have that many climbing partners who are better. If I wanted to climb things sooner rather than later, I was going to have to put in the many hours of slightly harrowing practice myself.

And honestly, I realized as I talked to more experienced climbers, it’s less that I personally am bad at it and more that everyone is. First of all, it’s a lot of new skills at once that are difficult to learn except through practice. Plus, regardless of your typical coping mechanisms for fear, you are going to have to do some kind of navigating them when you start leading trad. I used to be very prone to panic, but recently I had apparently become better at shelving my fear until after the danger had passed. At first, this meant I felt horrible right after a pitch and couldn’t do too many in a row. Recently, I haven’t felt mentally scared but still get stomachaches and feel emotionally drained after too much climbing.

All of that sounds worse than it is, though. Or more accurately, it’s kind of bad, but it’s also at least as fun as it is bad. It’s been rewarding to learn a complex and multifaceted skill over time, and it brings new meaning to practicing other climbing skills, knowing that they could get me to the top of more mountains. I’ve started being inspired following friends on more difficult cracks at the crag. I find my “uninterested in climbing” self watching technique videos and practicing rescue skills. Climbing has gone from just a social sport I don’t try that hard at to a mental practice that has taught me a lot of resilience. I’m still super new, so maybe I’ll get bored in a year. And I’m still honestly not at all interested in climbing very hard. But for now, trad climbing is my favorite thing to be bad at.