(I’m writing about 100 peaks I have climbed from a historical, personal, or climbing perspective. The full list is here. Also, this is my project, so I get to decide what a mountain is. This hill in San Francisco is almost 1000 feet tall, and I did walk up it, so here we go.)

Earlier this year, I walked out my front door in Seattle, into a snowstorm, and started walking south. When I finally got to San Francisco after 900 miles of walking, I assumed my friends in the area would be pretty busy and I’d spend a lot of time by myself. It was amazing how many people I knew in SF: a few friends I’d seen occasionally, some people I’d loved but failed to keep in touch with, and a bunch of acquaintances who reached out to me but who I mostly didn’t get to see. Still, I’d not known how long it would take me to get there, so I’d been unable to plan. My expectations were low for excitement, and that was okay. I was tired.

In fact, I’d spent the last month doing more socializing than ever before, in a way. I stayed with people I’d just met and shared vulnerable life stories, I talked to people about homelessness who had been homeless before, I met firefighters at bars and talked about workplace safety, and I’d been there for strangers’ dates, family homecomings, tears, and meals. I was raw from the kind of rapid closeness I’d been practicing developing with people from many backgrounds. 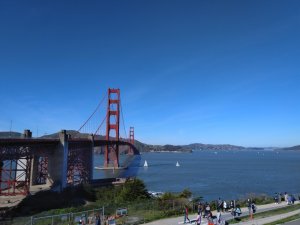 I took my last few steps and rung the doorbell at a Victorian-style house in a quaint alleyway on a hill. It was a perfectly still, summery day, one of the only days like it on my trip. My friends greeted me excitedly, and I was surprised at how easy and fun it was to catch up with them, almost forgetting I needed to shower and go to dinner at some point.

Chris and his wife Ellie had opened their couch to me. I knew Chris from college, and he had been dating Ellie that whole time. I had met her a few times before, but it was new and interesting to see them living together. Their apartment was a picture of domestic bliss with matching His and Hers coffee mugs and robes. We shared a lot of cozy time catching up in their living room. The only time I’d seen them in the past several years was when they showed up unannounced in Seattle on their honeymoon and stopped by to have a drink, giggling in our living room. It was sentimental and almost unbearably heartwarming to see them interact, to bake biscuits in their kitchen and come home to them.

In reality, all of my friends were there for me, taking time off, taking long train rides, and letting me stay with them. Generally, these were people who I hadn’t spoken to in years, but who I considered very special. It was interesting to see that the feeling was perhaps returned. I’ve always thought talking on the phone or texting was very difficult, but have really enjoyed visiting people in person and have found that when I see people after a long time, we fall into a familiar rhythm. But part of me fears that I am doing long-distance incorrectly, and that someday everyone will become strangers.

On the other hand, one of the things the walk had taught me was that even strangers were often friends, so I was in a great place to learn new things about my old friends, many of whom had changed significantly. They were all such interesting people before, I had some guarantee they’d be interesting now.

Another college friend, Josh, was generally inactive on social media, so I had literally no idea what had happened to him except that he lived in SF. I’d lost his number, so I messaged him on his neglected Instagram and hoped for the best. My other friends didn’t have his number, mentioning that he lived in Berkeley and they didn’t see each other much. He came over on the train for dinner with Chris and Ellie on my first night, and seeing all my friends together again over pupusas was great. Later, I also got to catch lunch with him at work and then visit his house in the evening. It was interesting to see where his life had gone. In college, I knew of him as a spontaneous and effusive creative person, and I’d assumed he wouldn’t have a “regular job.” But he’d created some kind of hybrid of himself and a typical San Francisco resident, where he worked 32 hours a week (for a company that made custom jeans based on 3D scans of customers’ bodies), and devoted his remaining time in phases to dance, capoeira, and art. We ate Brazilian food in the sun and went to a surprisingly charming open mic at a bar near his house. I met his roommate, and I saw drawings and other creations scattered around his sparse apartment, all in a style I recognized as distinctively Josh’s. We drank tea like the kind our mutual friend had made for us in college, talked about her, and almost cried. In the first of several abrupt-feeling goodbyes on my trip, we talked about wanting to interact with or touch random strangers, about the overwhelming nature of how many people there were you couldn’t ever know.

“Sometimes I also get the urge to bite people, if I’m excited about something,” I confessed, feeling a bit strange about that comment. He held out his arm for me to bite, I laughed and took the offer, and got on the train.

Another friend I remembered as spontaneous and free-wheeling was Emily, who I had watched art films and tried sensory deprivation tanks with in college. She seemed very settled in her own Victorian-style town home, and in a strange coincidence had also gotten into forestry. We huddled together barefoot on her couch, and over tea, she showed me photos of her family’s visit to China for a huge event honoring one of her ancestors, a famous general. There was a whole school named after him, where the schoolchildren welcomed her family with a performance. I left her house in the warm night, restlessly skipping down the street thinking about the Chinese children’s martial arts skills and remembering days with Emily in college.

After some restless sleep, I then visited a second Chris, my boss from a previous job who had been a Peace Corps volunteer and who had turned out to be a friend as well. We had quit our engineering jobs around the same time, me to try other things before eventually going back to school in Seattle, and him to go to UC Berkeley to return to International Development work. We had a lot in common as people unhappy with designing manufacturing processes for Boeing forever, and as people who loved the outdoors. We’d not interacted much for years, except through postcards.

Still, when I found him in his office at the school, his ponytail was longer and he was more polished than I remembered him, wearing a button-down shirt instead of one of his three threadbare T-shirts. But those changes aside, he had the same sandals and the same voice, and the same desire to wander aimlessly for hours, climbing hills near the school. We walked for a long time, talking about the mountains in Washington and how our lives had gone. He showed me his favorite pizza place and his favorite hill. It was great to see that he finally was doing something he actually wanted to do rather than awaiting the end of a necessary job. When I went to say goodbye, he headed off to do more work, and requested a second hug. I felt strangely sad about him working so hard, and about the fact that it might be a very long time before I hear from him again. It was, again, a strange bittersweet taste left after our meeting.

My friend Allen took a day off to explore with me. He showed me his house, with housemates I’d briefly met in college, and we sat on the porch drinking coffee and talking about life priorities. Even in college we had differed in that regard, but since then we had diverged even further, with him prioritizing his career far more and all but giving up climbing. Still, I found it very easy to talk to him again, and we agreed about some things, such as the importance of urban walks and jazz bars. Across several days, we shared some candlelit cocktails, dinner with my hosts, watching bike polo, and a long walk. We went to the top of his favorite walk to take by himself, to the top of Twin Peaks.

We explored the area, which is surprisingly beautiful and ecologically important. From the top, you can also see all of the neighborhoods in San Francisco, so Allen gave me a tour from above. Something about Allen’s confidential manner or seeing his favorite spot to go by himself once again made me feel very emotional. It reminded me of sneaking off with him to stargaze on rooftops during school. I started to get used to seeing him again, and then I went home.

I was also able to see my friend Jing, who for years now had been dating someone who I had never met before! She let me stay at her house, where I met both her cats and her boyfriend. We visited the climbing gym together and shared some laughs and triumphs. Though they had just moved in and were still outfitting their apartment, Jing still had random things that made me smile. She had made many prints, including one of an “ungoogleable” phrase, and she had a pile of rubber ducks she’d just been unable to resist taking from a free table and which she tried to get me to adopt. Her boyfriend shared the same silly sense of humor, and sharing puns with them was great. It was interesting how much he seemed to fit her as I knew her in college, even after several years. Right before I left, she came by Chris and Ellie’s house with me. They’d known each other too, but hadn’t managed to connect in San Francisco yet. 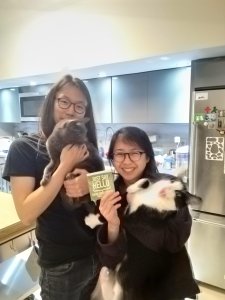 The saddest and strangest goodbye was to Chris and Ellie. But I was missing everyone back in Seattle too much, after being gone for a month and a half. Anticipating a visit for 34 days of lonely walking and then saying goodbye so quickly was a big feeling. It was an uncomfortable sugar-thick syrup in my lungs, a not-quite sadness that made processing any additional information feel impossible for a little while after I got home. I started to reintegrate myself into Seattle life, floating in a hazy cloud of overlapping worlds, all of the inner worlds of the fascinating strangers I’d shared a beer with on my walk, and all of the people I loved but couldn’t be near all of the time. Feeling close to people is an exhausting kind of delightful.