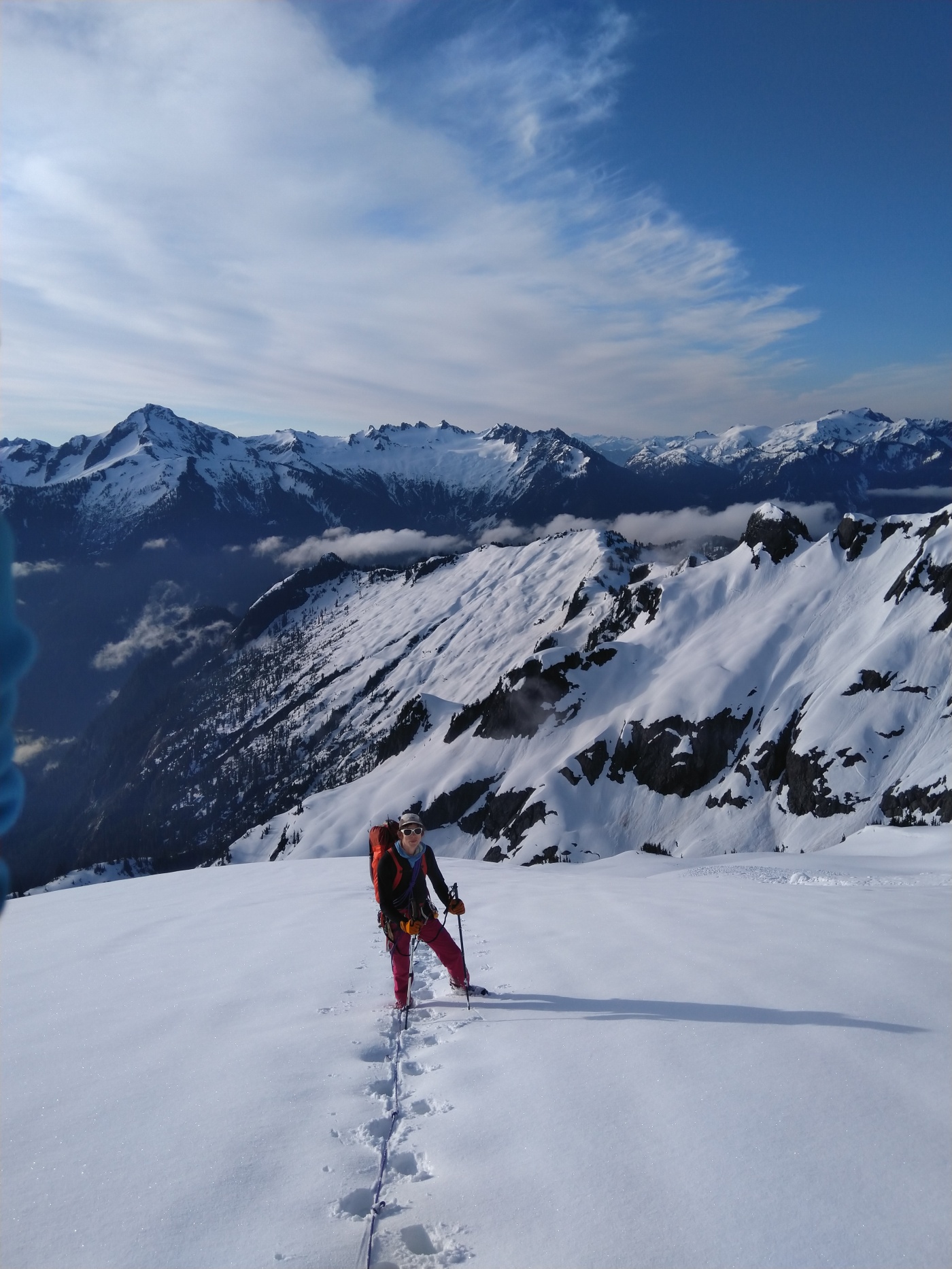 I’m writing about 100 mountains I find interesting, for various reasons. The full list is here.

When life gives you great weather but high avalanche danger, you find a low-angle route up something tall and pretty! One week in May, Eva and I saw the undesirable weather forecast and hesitated to be optimistic about climbing plans for the weekend, which we had planned to spend together. However, as the week progressed, my neurotic weather app checks left me more and more cheerful, and on Friday night we found ourselves going to bed at the sensible hour of 8:30 PM at the base of Mt. Shuksan.

We got started around 3:30 the next morning and followed the gentle trail for a while. It was impossible to see what the forest was like in the dark, so I looked forward to seeing it on the way back. Eventually, we lost the trail a bit in the snowy, sparse forest, which looked like a trail in every direction to my sleepy brain.

When we first got above most of the trees in the snow, a nearly full moon made an appearance next to a moody Kulshan in the near distance. The sky was rich royal blue and the snow sparkled. 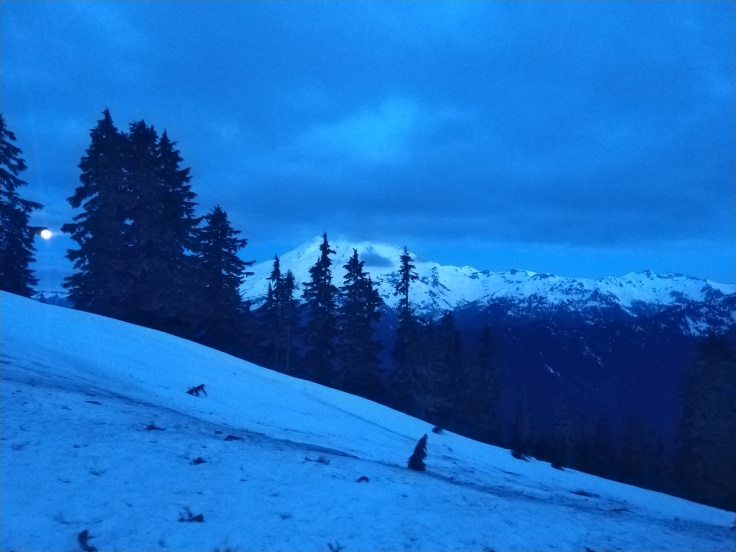 Even though it was still early, the snow texture wasn’t great. Perhaps with a warm, cloudy night and recent snowfall we had no chance of getting nice frozen booting conditions. Even though we were slow, we continued along the undulating ridge. We passed under some avalanche terrain, but not much. Most of the route was on the ridge and/or too flat to be of concern. Debris of small loose wet slides made walking more interesting for short sections. By this point, I had ditched my headlamp in favor of the soft morning light.

Now it was the time of day for pink tones on the surrounding mountains. We both gasped at views of Kulshan, which we were treated to all day. The snow only got deeper, warmer, and more like the texture of freshly-poured concrete throughout the day. Occasionally we would sink up to our upper legs. It was strenuous.

We roped up at the glacier, tying a bunch of drag knots, and took turns going in front. We switched off every 20 minutes or so, which made breaking trail in the fresh snow from the last couple of days much easier. I don’t have the chance to do that very often, but it was welcome to finally have a partner with a very similar energy level and without skis, someone to share the joy of postholing.

If I was going to sink repeatedly into deep snow somewhere, however, this was where I would choose to do it. The Cascades stretched around us in layers of soft morning off-whites and dark, ragged rocky edges. The drag knots in the rope between us traced parallel lines in the snow next to our single line of bootprints, creating one long line that stretched behind us with no other footprints in sight. The delicate swooping ridgeline before me changed, its shifting geometry punctuating the meditative repetition of walk, watch the glacier rope advance, switch, walk, watch the sky. 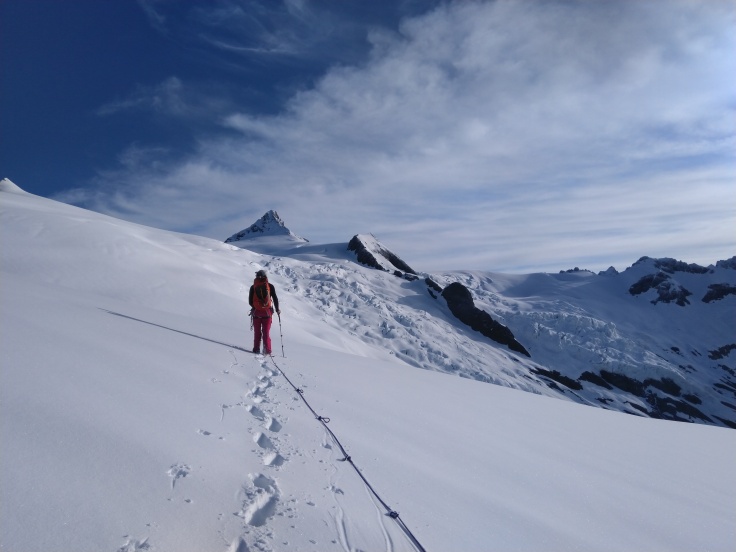 At the end of the morning, we made it to the base of the summit pyramid. It was covered in avalanche debris, but the snow still seemed stable enough, so we decided to go for it. I started up, kicking steps, until the snow became a bit steep for approach shoes and it became obvious that Eva would have an easier time in her boots.

She climbed the summit pyramid slowly, and I followed, warming my hands between slow steps. I wanted to rush up the slope like a little kid running up stairs on all fours, but I knew the steps Eva made would also be much safer for both of us on the way down. I saw some skiers down below approaching us. It was slow-going, and gradually got steeper. I navigated some kind of scary icy-moss-on-rocks bits, trying to get good purchase with at least some of my limbs.

Toward the top, I was standing pretty much just on the front points of my crampons. Eva was more equipped for this actual icy part (both in terms of gear and experience), but it was a bit harrowing in my flexible shoes with my one lightweight ice axe. Still, I hurried up top, where we took a quick, uncomfortable photo and both realized we really didn’t want to downclimb what we had just done. 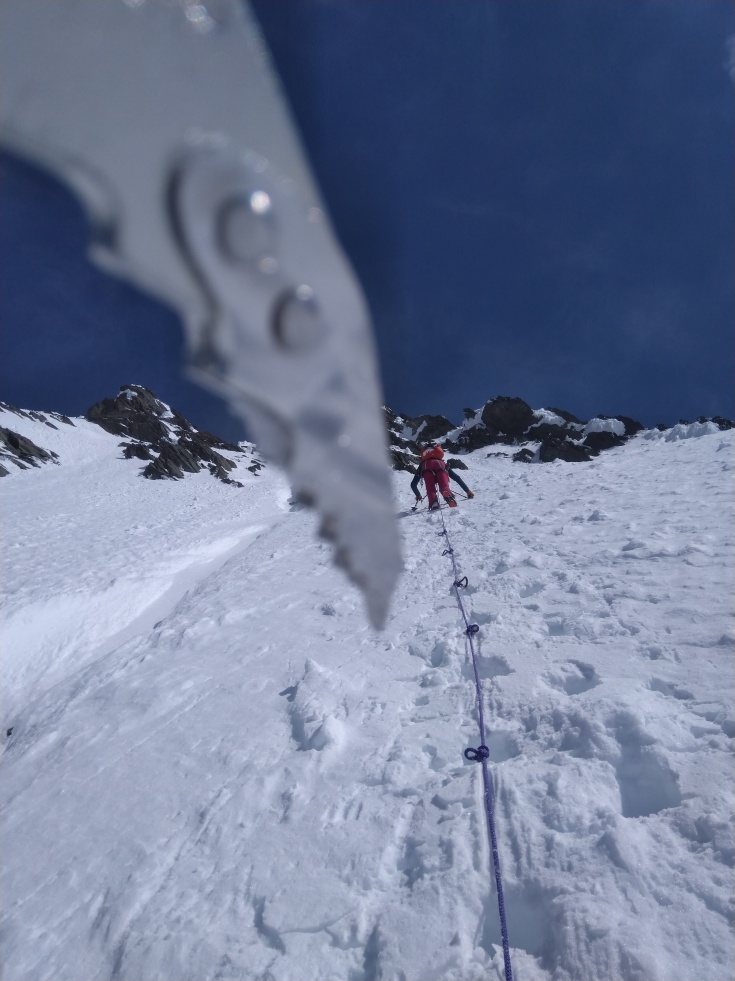 Luckily, we still had the glacier rope with us. Together we decided to bury my axe and anchor me to it while I belayed Eva down to some rap rings we had seen. I put on my mittens, but as we worked I got a little scared, as I tend to do since I have some residual damage from previous frostbite and a (not unrelated) fear of cold. The unpleasant feelings really only lasted for about 15 minutes.

When she got to the rings and started belaying me, I got pulled away from my good stance. I reached into my pack and grabbed what I could reach, the non-business side of my snow shovel, and awkwardly dug out my axe with the handle. When I got to the rap station, we both rappelled down past some of the steeper climbing.

From there, the downclimbing was easy enough, though the snow was an absolute mess on the summit pyramid by the time we got to the bottom, and I would not have considered climbing it then. We had seen no crevasses on the way in and didn’t feel like dealing with it anymore, so we put the rope up. We started heading back. It was easier now, following our tracks, even though the snow was even softer.

As my ankles started to get sore from slushy plunge-stepping, we encountered a couple of groups of other people on the way down. They asked me questions I never know how to answer, like “do we need a rope?” and mentioned having seen small avalanches on their way up, which made sense based on the snow conditions. We were treated to some very beautiful mossy woods, a trail with views of waterfalls and mountains. I listened to the trickling water sounds around me and admired wildflowers.

I was surprised to see people with snowshoes. Usually, it’s only me willing to go out with the skiers and put up with the snow conditions they get so excited about in spring, but which make walking so slow. “The thought of snowshoes entered my mind,” Eva had said while planning our trip, “but I’d rather bail than deal with those.” Luckily, we squeaked by with just solid enough snow to avoid the foot torture mechanisms! 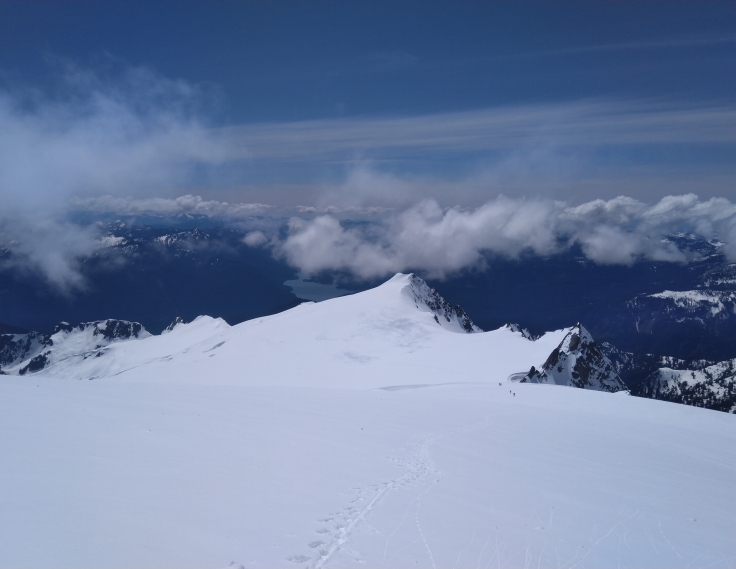