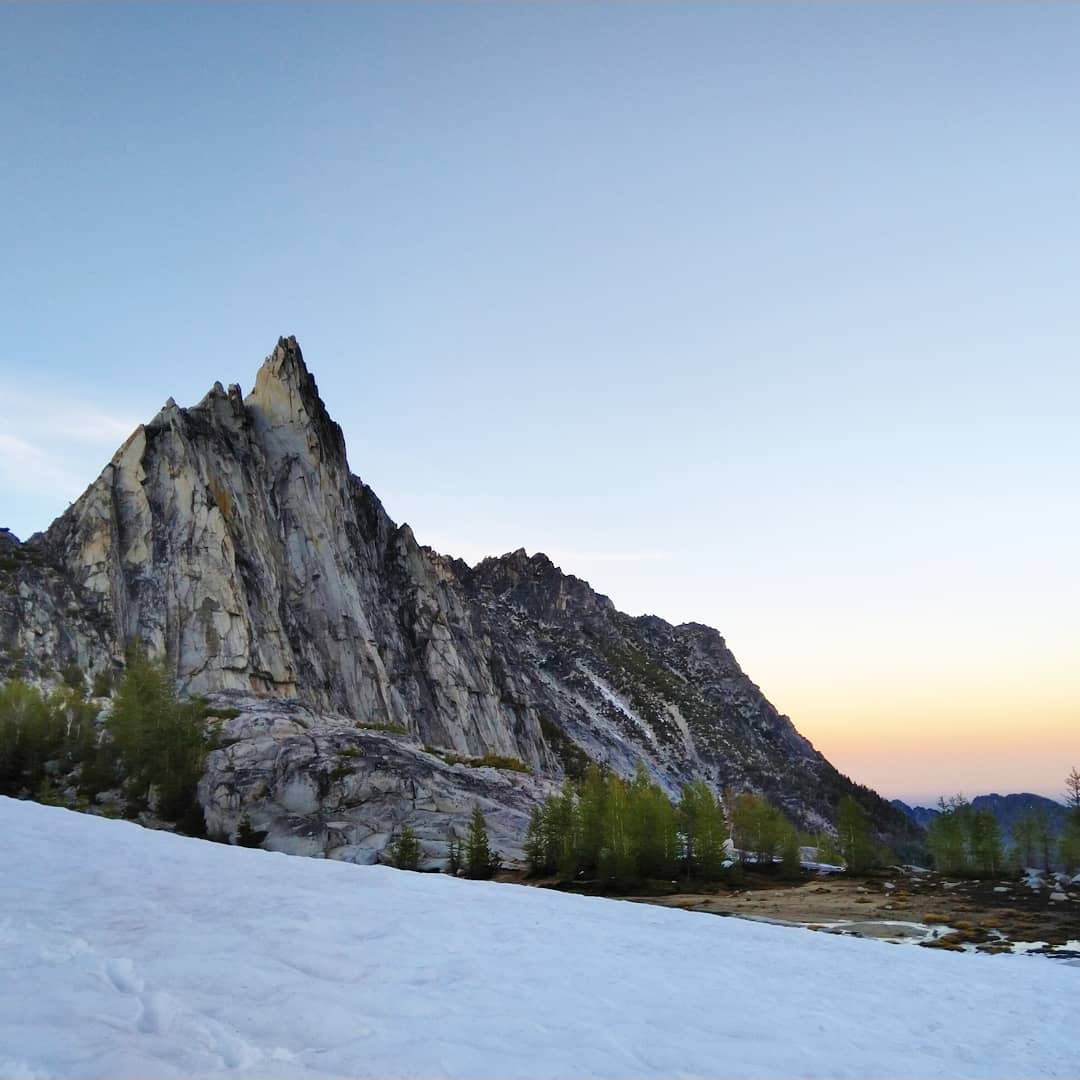 I’m writing about 100 mountains I find interesting. The list is here.

I should have known not to climb Prusik on a weekend. The iconic peak in the Enchantments, probably the most photographed thing in the most photographed place in Washington, is as popular of a destination as you might expect. In fact, it was even more popular than I expected, located as it is almost 10 miles from the trailhead, in an area where camping permits are extremely hard to come by. Surely, I assumed, anything that involves placing cams and hiking 19 miles can only draw so many people in a weekend.

As it turns out, the camping permit system may be the only reason I can hope to get near Prusik. The Enchantments are a wonderland of granite peaks, mountain goats, and small, whimsically-named alpine lakes, all sitting at around 7000 feet elevation. The area is famously crowded even with the limitations on camping, and a few parties with camping permits were climbing the peak that day. On our way in, we also encountered a couple of older men who were climbing a harder route car-to-car, Solid Gold. Even though the hike is decently long, the time flew by as I hiked next to the other team and talked about learning to climb and about socks. The one guy was almost fatherly, warning me not to get hurt at Index and encouraging me to chase my goals. Wade and I enjoyed good snacks, great weather, and great views of the surrounding peaks. When we could see the impossibly pointy triangle that is Prusik, I pointed it out to him excitedly.

It was truly more crowded than I could have imagined, though. We also met other parties headed for routes on the south side and, when we arrived at base of our route, saw a party of six which was just getting started on the west ridge.

Okay, it’s a long day already, I thought, we will just wait an hour or so and then get started! It was a beautiful day out, and we waited happily on the team in front of us. Eventually, another team arrived behind us. I realized one of the women was a friend of a friend, and we chatted a bit.

Several hours later, it turned out that while the route itself was easy and enjoyable, we spent probably over five hours total waiting on the other team, mostly on the route, where it would have been difficult for us to turn around. Long story short, they were nice enough, but they took an extremely long time. This was going to be something like a 17 hour day for me and Wade without the delay. We did our best to help them, wondering increasingly why they wouldn’t let us pass, especially as they had a campsite and we (and the team behind us) had to hike back out that night. Still, I figured I’d had plenty of 20+ hour days by my own choice or error, so I tried to be forgiving and have a sense of perspective. After all, climbing a super moderate route car-to-car did not make us deserving of special privileges. As we started to rappel off the other side of the peak, I thought I overheard someone saying something snarky about us (I am still unsure if that is actually what happened), and suddenly the frustration of spending around 8 hours on a climb that probably would have taken us less than three rushed at me at once.

It was a joyless rappel. I’d had a sunny attitude most of the day, but the notion that the other team might not only have delayed us, but also might have for some reason been irritated with us after what I considered to be extreme patience on our part, was too much for late-day Nastassia brain. Of course, during the way down, I also happened to get hit by a moderately-sized falling rock, leaving a bruise on my leg. By no means a big deal, but I felt defeated by the circumstances.

When we got back to the main trail through the “Core Zone,” the one followed by backpackers, the late evening light gave an otherworldly feel to the tarns and granite all around, white rocks speckled with black, covered in patches of snow that reflected the pinkening sky. I stopped and breathed and looked at Wade and we said, “if we had to watch a sunset somewhere, I would pick here.” 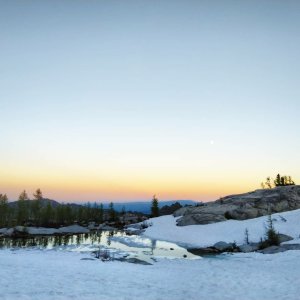 It was so beautiful among the lakes as it got darker I was actually grateful for the chance to see the area in the evening without a camping permit. When we got to the top of Aasgard Pass, the short scrambly part of the trail where we had gained most of our elevation that morning, we saw a team we had met earlier on Prusik after they completed a really challenging route. They were staring at the sky, laughing. I was happy someone else was taking a moment to enjoy the view, even if we all had to descend the sandy mess below us in the dark.

After we shared some laughs, we all headed down Aasgard, tripping and sliding, as the sky darkened over Colchuck Lake below us and the distant peaks beyond. The guy from the other team had a really interesting life full of climbing adventures, but was very quiet. I asked him questions, trying to get stories out of him to keep me awake as I stumbled on the scree repeatedly. He didn’t seem upset about sharing them. We shared a love of remote places in Washington, though he lived in the Southwest.

Eventually, they got ahead, and we started hiking around the lake again. When we were alone I allowed the lack of sleep and frustration to get to me again. We had woken up at 4 AM, and it was now after midnight. I still don’t know why my attitude was so fragile, but Wade convinced me to sit down, and I felt a lot better after just taking a moment to breathe again. We passed our friends from Aasgard at camp, and they offered us tea. We turned down their nice offer, said goodbye, and began the tedious part of the hike. I made it more bearable by offering Wade gummy spaghetti, and we reminisced about other memories we’d shared on that trail before. The hike felt extremely slow, but the trail was soft, and I looked forward to my soft bed in my van at the bottom.

We eventually got to the van, shared a weary hug, and fell asleep for a few hours before having my favorite biscuits for breakfast. I found one of the girls from the team behind us on Instagram and saw that they had made it down and were enjoying brunch. After sleep, I remembered the twilight colors on the lakes with fondness. I already found myself wanting to learn to climb harder so I could do a less popular route next time. But first, another nap.